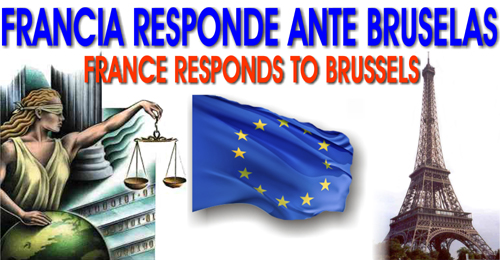 As there was no other way around it, France had to change their law on expulsions to avoid threatened sanctioning from Brussels.  There were only a few hours left before reaching the deadline Reding had given, when the Community Executive finally received documents with the French authority´s written response.  This is currently being examined by the European Community Services, who will make their conclusions public knowledge in the next few days.

It was a given requirement for Sarkozy to adapt French legislation to the European Union to be able to guarantee the building of a united, free, democratic Europe based on respect for human rights.

The attempt to find a “scapegoat” in the Roma people is a clumsy strategy, and one far too easy to use, which when conveniently employed by unscrupulous politicians can become a dangerous instrument causing confrontation.  The consequences for the Roma community and for society as a whole are serious as dignity and coexistence are negatively affected.

The European Commissioner for Employment, Social Affairs and Inclusion, Lásló Andor, in Bucarest, called for a “better use” of European funding for the inclusion of Roma people.  He manifested a need for “a joint effort by the Member States, regional and local governments along with public organizations in society”.

Andor knows that the inclusion of the large European Roma people constitutes a social and economic benefit for everyone.  Funding for inclusion and programmes will not be beneficial unless there is a real improvement in the living conditions of our people.

If the Roma community itself has difficulties become involved in this strategy due to the fact that they have not yet reached the “specified age” and therefore cannot access the programmes which are available to the gypsy population.  What results can be expected?

What good is it doing countless studies and reports if a substantial part of the financial resources destined for inclusion have been used up precisely on producing just them?  There are more than enough reports – it is now time to act.  All we need to do is to take a look at the gypsy organisations that work “on the streets” with our people to see where the real necessity is.

If we genuinely want to optimize resources to obtain real results, there is an urgent need to start doing something about it, and prioritize moving forward in that direction.  Andor is aware of the demagogy that exists on this subject and also about the interests that have been created with respect to it.  We are sure that both Andor and Reding will vouch for the optimization of these resources until reaching an established set of acceptable, efficient parameters.

Reding and Andor will not give up their quest, showing deep commitment at the Córdoba Summit and also during “the battle” held against France.  The European Union has defined a clear way forward along with specific objectives and therefore France, along with the rest of countries, has no option but to accept the “rules”.