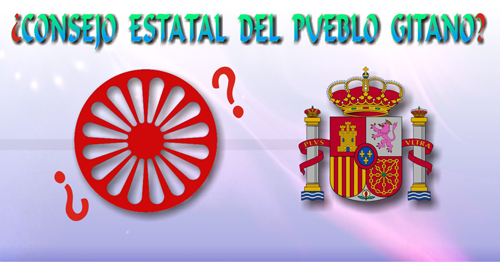 State Council of the Roma people?

That the expected renewal of the State Council of the Roma people is perpetuated again, even knowing those who have governed and led, that the Council does not deserve its acceptance by a large part of the Gypsy community in Spain, offers very poor expectations of regeneration and working towards the Roma people as a whole.

Surely the current government does not even have a clear understanding of what has been happening in this regard, but certainly we will do whatever necessary to convey that you can have neither the mechanisms nor the people who have so far regulated and directed everything concerning the Roma People. Including self-regulation and control of the State Council of the Roma People.

In Spain there are many individuals and organizations to serious gypsy who only care about the daily work and dignity of our people, individuals and organizations who run away from vested interests and waiting, like us, a real change of direction with the reorientation required by Brussels to the EU states in regard to plans aimed at Roma inclusion. Understanding thus that no longer fit "arrangements between friends" or exclusion of any kind.

So this renewal is not only unacceptable but also a real insult to our people, as it maintains a situation that came "bleeding" from long ago, being now entered a new political era in which the voice of the Roma in Europe has a special place. It is paradoxical, therefore, that the renewal of the State Council of the Roma again ignored the many voices of those who every day are "leaving the skin" for our people.

Preferable for all, even to the reputation of Spain to Europe, had been the extinction of the State Council if not addressed the issue of urgency. Now that we are fully conscious and aware of the value for the government of Europe is the voice of each and every one of us, as well as its firm determination to stamp out any exclusionary mechanism that prevents the free participation of all policies, decisions and their implementation.

This gives us the strength to not remain silent and therefore we will fight with all means at our disposal against this renewal. Reporting to the appropriate in Brussels and Strasbourg of a situation in Spain of which we were aware when personally I stated in the Commission my concern about the systematic exclusion to which we are undergoing a large part of the associative Gypsy this country, that has been smear causing a large population of the same between the blunt majority, and results in the "paralysis" or removal of a large part of associations in recent years. The gypsies know what I'm saying and a simple survey would suffice to demonstrate this sad fact.

Also on several occasions I have expressed to the European Commission the widespread skepticism in our people by the aid intended for the Roma Europe, how they, though substantial, have been systematically "lost on the road" (see). To this the Commissioner Laszlo Andor himself acknowledged that it would require a profound change, not only in establishing priorities for the Roma in the different European policies and programs, as has been done, but also in how implement these policies and to evaluate projects for the Roma.

It is for this reason that the Commissioner Andor also encouraged us to prepare for the last International Seminar Rome, all the proposals that we considered appropriate facing the new European strategy 2020, he released in April. Proposals that reflect the concerns of all the international Roma community (see) and that have already been delivered to Andor in his day, saying that his gratitude and commitment that they would be taken into account in the final design of the 2020 strategy.

If anyone thought that this time we were going to remain silent once more, think again, because today more than ever we have an obligation to fight for those who have nothing, to give voice to their needs, suffering the tragedy and offer daily, least, a modicum of hope that really is working in Spain and Europe to find a solution. Outside the privileges of the few made by a majority.

Our people, more than ever, needs credible signs that something is being done to rescue the economic abyss, and social work in which we currently find ourselves, and just news like the recent renovation of the State Council of the Roma people, does not favor nothing to improve those expectations.

It is for this that now I appeal to all people and organizations who wish to join in this effort to "dignify" the political and social action of our people.